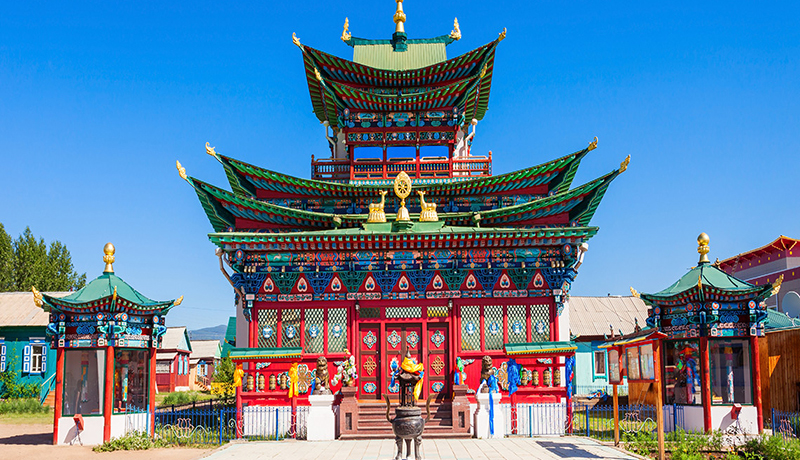 Founded in 1945 during the religion’s lowest ebb in the Soviet Union, Ivolginsky Datsan – also known as Khambyn Sume – remains the must-see spiritual centre of Buddhism in Russia. Several temples, the Dashi Choinhorlin university and the houses of the lamas comprise a fascinating Buddhist microcosm.

Here you will find Chinese and Korean-style wooden temples standing side by side with Central Asian suburgan stupas. Visit a Bodhi tree like the one that sheltered Gautama in the greenhouse. Spin the drum-sized prayer wheels before going into one of the lavishly decorated and vibrantly painted temples that clash so vividly with the surrounding taiga!

Pilgrims come here from all over the world. One local relic draws them in above all else: the incredibly well-preserved remains of Khambo Lama Itigilov, a revered early-20th-century Buryat Buddhist leader. On eight days in each year, visitors like yourself may witness the miracle that baffles scientists and awes believers.

A cultural as well as a religious centre, the datsan hosts a Buryatian art gallery where you could peruse paintings and sculptures by gifted local artists. Just outside its walls, you can spectate at competitions in traditional sports like archery, horse riding and wrestling.

Perfect tours to visit Ivolginsk datsan temple
Let’s talk about your next trip
Send us an email tours@travel-baikal.com
Reach out via phone +7 (395) 248 07 88